I'd like to introduce a new monitoring technology that is included in the latest Stable version of PRTG (released on Monday this week).

Our new „Passive Application Performance Sensor" allows you to monitor the performance of a server/service without actually accessing neither the client nor the server directly.

For most other monitoring scenarios you either need access to the server/device itself (to monitor vital data like CPU, memory, disks, bandwidths, etc.), or you need to access the service (to send simulated requests to the server and look at the timing and the content of the replies).

Our new sensor type uses a completely different approach: This sensor applies PRTG's built-in packet sniffer to look at all TCP packets going into a server, and it checks the reply packets from the server as well. The idea is that if we measure the time between a TCP packet Roundtrip, we can actually measure the performance of the service/server.

Of course, this approach works only with a limited set of network protocols that create a new TCP network connection for every request, for example, SOAP, as well as most XML-interfaces and REST services. These are mostly built on top of http/1.0 and http/1.1 (though for 1.1 keep-alive may skew the results a bit). Services like POP3, IMAP, and SMTP are also viable candidates.

PRTG must be able to access the TCP packets of the server you want to monitor. You can either use port mirroring (Cisco calls this SPAN) on a switch (the mirroring port must be connected to a system with a PRTG probe), an external mirroring device, or you can install a PRTG probe on the server itself - if you have access to the server - and sniff the packets directly on the network card. Please see "Monitoring Bandwidth via Packet Sniffing" in the PRTG manual for details.

Now create a new "Passive Application Performance Sensor" (usually you would do this on the probe device). 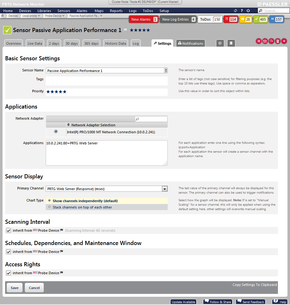 In the text area, provide one line per TCP service that you want to monitor:

For each application, enter one line using the following syntax: ip:port=Application Name

The sensor will create sensor channels with the corresponding application name for every entry. For SSL connections, add ",ssl"  behind the port number. Port 443 automatically enables SSL mode. In SSL mode, the SSL handshake is ignored and the first data packets sent to and from the server are used for the measurement.

After a few minutes, PRTG will display the following data:

In addition, you will see four channels for each application that you created with the setting in the text area: 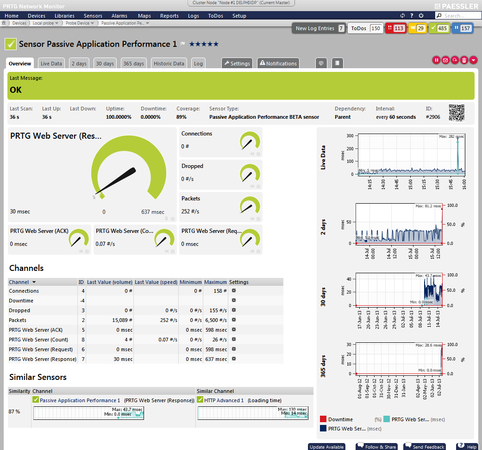 For example, you can use our new sensor type in the following scenarios:

2 Days Graph of the Sensor

This Sensor Is Experimental

Please note that the Passive Application Performance sensor is currently in beta status. Hence, it might not work as expected and methods of operating can change at any time. We look forward to your feedback!

Try It Out Now!