Recently Cisco has implemented NetFlow 9 for its popular ASA 5500 security and firewall appliances. But this implementation of NetFlow is quite different from what other Cisco devices provide. It is called "Netflow Security Event Logging" (NSEL) and was originally introduced on the Cisco ASA 5580.
Now, with the latest firmware (ASA 8.2.x or later), it is now extended to other Cisco ASA models. In fact ASA NetFlow was initially not intended to be used for realtime/live traffic analysis (it was created for monitoring of security events)... But it is still a viable option for bandwidth monitoring. And with PRTG Network Monitor V7.2 this option is fully supported, including bandwidth computation, Top Talkers, Top Connections and Top Protocols!

The following screenshot shows a comparison of the bandwidth monitoring results of three different techniques. It shows traffic through an ASA device measured using SNMP (traffic on the "WAN" port), NetFlow 9 (analyzing NetFlow 9 packets of the next Cisco router upstream) and again NetFlow 9 (NetFlow9 from the ASA itself). 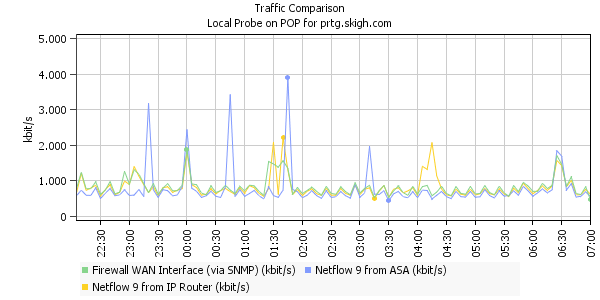 Our knowledgebase article "Monitoring Cisco ASA Firewalls with PRTG using Netflow 9" explains how to configure the ASA and PRTG and all the other details you need to know.

All about PRTG Cisco Network