Blog Home > Who Else Can Remember Netscape? A Brief History of the Internet - Part 2 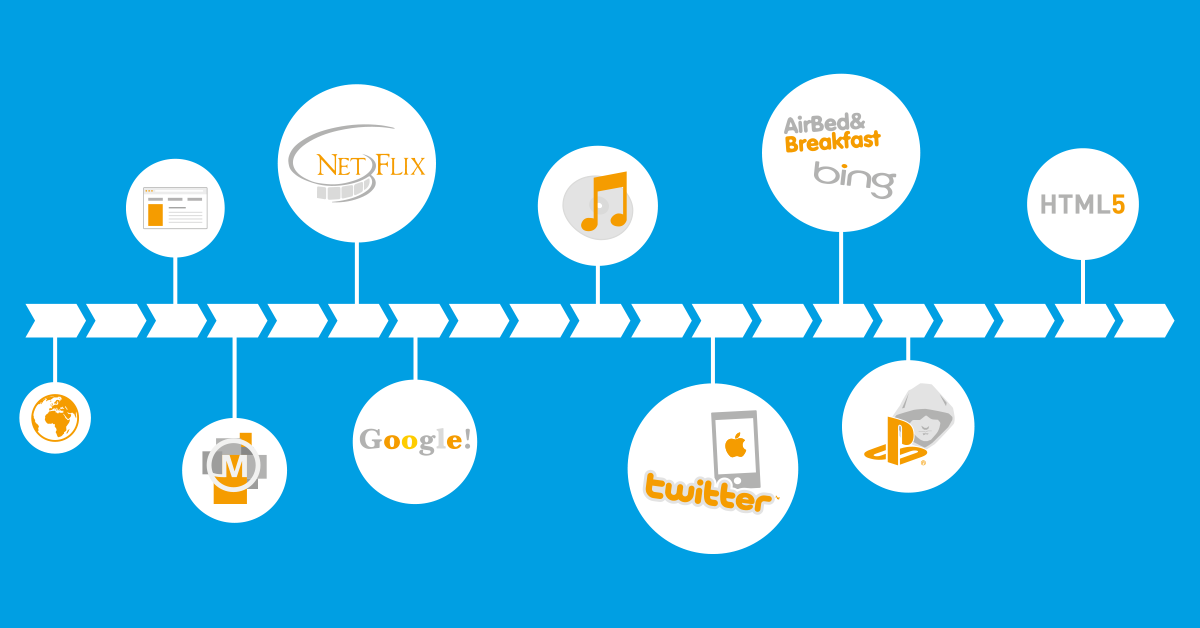 Who Else Can Remember Netscape? A Brief History of the Internet - Part 2

Hey guys, here we present to you The History of the Internet (Part 2), which is again intended to be brief, gripping and necessarily cursory.

Today we start in the 1990s, with the invention of what became the basis for the World Wide Web - and, despite certain rumors, Al Gore wasn't really involved.

A CERN scientist named Tim Berners-Lee develops HyperText Markup Language, or HTML. The concept allows text and pictures to be encoded so that when clicked, it leads to another internet document or file. This will form the basis for the World Wide Web.

In an unfortunate comment made while running for the Presidential nomination, Al Gore said that he “took the initiative in creating the internet.” This comment was publicly mocked as Gore claiming to have invented the internet. What he actually did, in 1991 was introduce the High-Performance Computing and Communications Act of 1991 (known as the Gore bill). The act allocated $600 million in funding to help fund the National Information Infrastructure, or Information Superhighway.

The First WebCam: Engineers hook a camera pointed at a coffee pot to the internet, so they could see when it became empty. This becomes the first known webcam.

Up until now, the Internet has been largely a text-based system requiring knowledge of text command lines to use. While at the University of Illinois, Marc Andreesen develops Mosaic, an internet browser that allows users to display webpages and images. Users could use a mouse to easily scroll pages, point and click at links.

The U.S. government gets out of the Internet business, privatizing the Internet’s backbone and decommissioning the NSFNET backbone the following year.

Andreesen takes his Mosaic browser to the private sector from the university in the form of Netscape, the first commercial browser. During 1994, Microsoft, sensing a threat to its computing dominance, creates its own Internet Explorer browser, which it gives away for free as part of its operating system.

Also in 1994, Jerry Yang and David Filo launch Jerry and David’s Guide to the World Wide Web. The company would later become Yahoo!, a category-based internet directory of website links.

The First Spam: Two lawyers post the first ‘spam’ to the internet: An offering for Green Card services is cross-posted to nearly every single group on Usenet, regardless of relevance.

Online companies Amazon and eBay are founded. At this time, Amazon sells only books, and eBay only does auctions.

Netscape has its IPO and begins the Internet bubble on the U.S. stock market. Its stock price quickly skyrockets from the $28 IPO price to close at $58.25. By December it was worth over $80 per share.

The now ubiquitous streaming service Netflix is launched as a DVD by mail service. Users signup and select DVDs online over the Internet, but physical DVDs get mailed to the home and mailed back when the customer is finished. Two revolutionary ideas propel Netflix’s success: no shipping fees and no late fees.

Google is launched in 1998. Google’s initial algorithm basically counted the number of links a website had pointing at it. The more links, the higher the website ranked. While ‘Search Engine Optimization’ or SEO has grown much more complex, this is still the underlying basis for the Google ranking algorithm today.

The IPv6 Standard is published. The original IPv4 standard provides what at the time seemed like a lot of IP addresses, approximately 4.3 billion. However, concern about IPv4 addresses eventually running out spurred the development of IPv6, which offers 3.4 x 1038 addresses. While this seems like more addresses than will ever be needed, if history is any guide, sometime in the future, that will prove not to be the case.

The Napster service goes online and quickly becomes a popular way to share music files for free, illegally, setting off the still raging battle between the music industry and pirates. The Internet affects everyone in America for the first time as the bursting of the ‘dotcom bubble’ crashes the stock market and takes the economy with it.  In one of the most disastrous mergers of all time, AOL buys out Time Warner for $165 billion in mostly stock, later turning out to be largely worthless.

Wikipedia launches as a free, user-created and edited encyclopedia. While the effort is initially mocked and its accuracy frequently questioned, the website continues to be one of the most visited on the Internet today.

Apple launches iTunes as a way to legally buy and download music over the Internet. All songs were 99 cents each.

Facebook is founded by Mark Zuckerberg while at Harvard University. Initially, the now worldwide, Facebook was limited to just Harvard students. It was eventually opened to all students, and by 2006, opened to everyone over the age of 13.

Although first used in 1999, the term Web 2.0 goes mainstream after computing book publisher O’Reily Media hosts a Web 2.0 conference that draws the attention of the tech press. Mydoom, the fastest ever email-spread worm/virus infects machines globally after unsuspecting users open an infected attachment. YouTube is founded as a way to upload and share videos.

The first tweet on the Internet service Twitter is sent by Jack Dorsey on March 21st 2006 and Google buys YouTube for $1.65 billion. In 2007 Steve Jobs announces the new Apple iPhone running the iOS operating system, a key component in bringing mobile Internet to the masses beyond the email-focused Blackberry system.

Microsoft, then the #3 search provider, tries to jump to #2 by offering to buy Yahoo for $44.6 billion. The deal is rejected by Yahoo, which says the deal undervalues the company. The decision will lead to “activist shareholders” forcing out CEO Jerry Yang, before eventually cutting a search deal with Yahoo anyway.

Google releases its own browser as a split open-source project called Chromium, and a Google-branded browser called Google Chrome.

Airbedandbreakfast.com officially launches in August 2008. A year later the platform changes it name to airbnb.com and starts growing at a rapid pace, soon offering more hotel rooms than many of the largest hotel groups.

Microsoft, having run through several previous names, rebrands its search engine as Microsoft Bing. According to a 2013 Pew Research Center survey, 38% of adult cell phone users use their mobile phone to access the Internet.

A hack of the PlayStation Network sends it offline and compromises personal identification of its 77 million accounts. It is considered to be one of the five largest data breaches ever.

ICANN allows the creation of new top-level domains to anyone willing to pay a fee and able to show that they can support the name. Numerous top-level domain names are registered including those by major companies such as .google, .apple, .nike and so on.

Twitter files for its IPO at $26 per share. The company’s stock soars on the first day of trading even though it has no profits.

Although ransomeware has been seen in the wild since 2005, CryptoLocker becomes the first large-scale ransomware attack to succeed by using a trojan to infect and encrypt systems, then demanding a ransom paid in Bitcoin.

Even though various parts of HTML5 have already been incorporated into existingbrowsers, HTML5 is finally given Recommendation (Final) status from the World Wide Web Consortium (W3C). Facebook buys WhatsApp for $19 billion. And Yahoo, which was once a dominant Internet player, announced it would sell its core operating business to Verizon for a mere $4.8 billion.

The Internet Engineering Task Force (IETF) publishes RFC8200, announcing that IPv6 is now the standard protocol for the Internet.

The most pressing, open question for the future of the Internet is not how the web will change, but how this process of change and evolution itself will be managed. So QUO VADIS, INTERNET? Well, we all don't really know. But we can give you all relevant informations about SNMP. Check out our free white paper beneath this article. And if you haven't read Part 1 of our History of the Internet, you can do so here.