Blog Home > Why ARPAnet Wasn't the Beginning: A Brief History of the Internet - Part 1 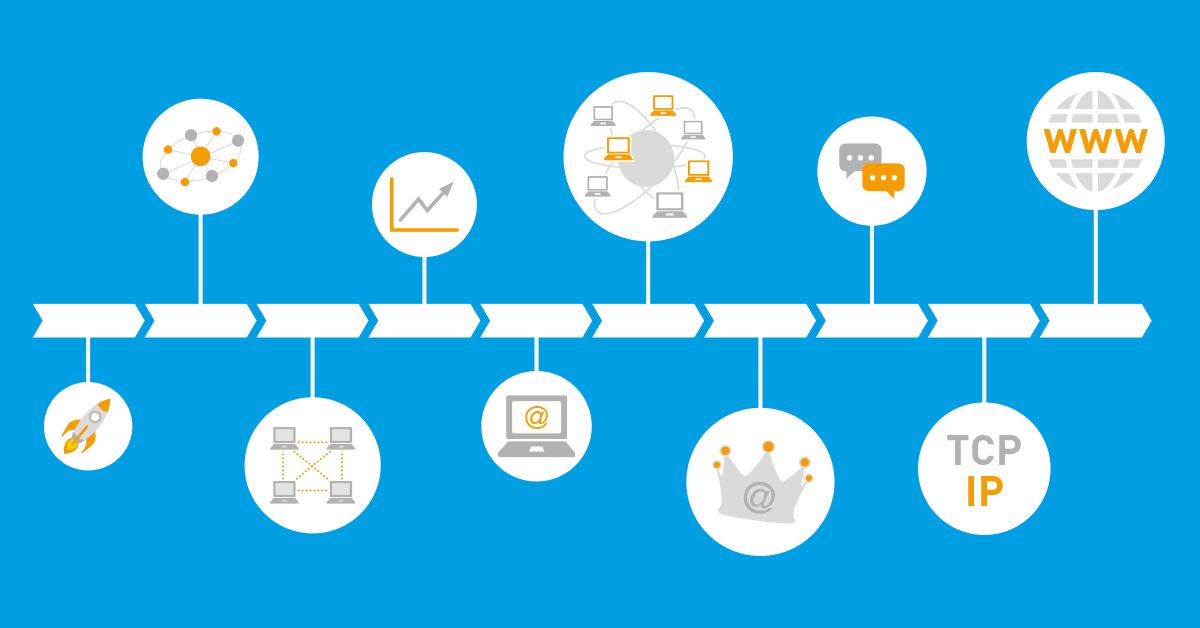 Why ARPAnet Wasn't the Beginning: A Brief History of the Internet - Part 1

Hey guys, we wanted to post this for a while now and are happy to present to you: The History of the Internet (Part 1), which is intended to be brief, gripping, necessarily cursory and also therefore incomplete. If you feel there's something missing, comment beneath this article. Also we don't begin somewhere in the 1980s, but already in 1957.

In 1957 the Soviet Union became the first nation to launch a satellite into orbit. While the satellite didn’t do much, its launch concerned the United States. Not wanting the fall behind in the technological innovations, the US government reacted by launching a variety of programs and initiatives, including NASA and announcing their place in the race to land a man on the moon. One lesser-known government agency that was formed during this time was the Department of Defense’s Advanced Research Projects Agency, or ARPA (later referred to as DARPA.)

1962 – The Intergalactic Network of Computers

As many computer scientists were working on a way to connect computers for a wide variety of reasons, advancements in the Cold War provided much of the funding. Some military strategists were worried that a Soviet attack on the phone system would be able to cripple the entire network rendering Washington, and other command centers, unable to communicate. An ARPA affiliated scientist named J.C.R. Licklider proposed an “intergalactic network” of linked computers in a series of memos. Such linked computers would be less susceptible to Soviet attack.

In 1968, ARPA put out a request for proposals to actually build a network of computers. This network, the original ARPAnet, and its continuous addition of systems would eventually become the modern internet. The first two computers were connected in 1969. One computer was located at UCLA, and a second at Stanford. The team at UCLA would begin by sending the “login” to the Stanford system. Both the ‘L’ and ‘O’ of the “login” were received before the system crashed, but it proved that the two systems could be linked over long distances. By the end of 1969, there were four nodes connected to the ARPAnet: Two from the original UCLA and Stanford locations, and one at University of California Santa Barbara, and one at the University of Utah.

During 1970, the ARPAnet grew to 13 different nodes, including a half-dozen east of the Mississippi River. Though the military needs for such communications diminished due to advancements in other forms of communication, ARPAnet still realized the original vision of coast-to-coast communication. At the end of 1970 the Network Working Group finished the initial ARPAnet protocol called the Network Control Protocol.

1972: Email and ARPAnet Is Ready for Its Closeup

The first public demonstration of ARPAnet took place in October 1972. This premiere highlighted the ‘fancy’ new application of electronic mail, allowing messages to be sent and received at nodes on the ARPAnet. The program invented the usage of the @ symbol in email addresses.

Licklider’s initial vision of an international network of computers was realized in 1973. In that year, computers in England and Norway were connected to the ARPAnet.

While working on the protocol that would eventually become TCP/IP, the ARPAnet team published RFC 675, Specification of Internet Transmission Control Program. This included the first known use of the word “internet”. Queen Elizabeth II sends an email message on March 26th 1976.

The Usenet bulletin board system is created and widely disseminated. This system allows the users on the ARPAnet network to easily engage in “non-work” activities such as sharing jokes, recipes, stories, and more. Usenet used categories to organize messages. The category “alt”, or alternate was the category that had no rules or regulations and quickly became the biggest root category, predicting the coming “anything goes” nature of the internet. It was immortalized in a Simpsons episode when Comic Book Guy looks for information by typing in alt.nerd.obsessive

While the ARPAnet was a global network, it was also a single network. In 1983, ARPAnet began using the TCP/IP protocol. The protocol took the network beyond connected computers, and turned it into connected networks. ARPAnet was interlinked (‘internetted’, if you will) with the National Science Foundation’s network called NSFNET.

As computers were added, users needed an easier way to communicate with them. The Domain Name System (DNS) was established to provide easier to use computer names. These original top-level domains are .com, .edu, .gov, .org, .net, .mil, and .int for international (non-US) systems.

Symbolics.com becomes the first ever registered domain. While the company largely went out of business in the 1990s, its domain name was purchased by another company, and continuously registered ever since, making it the oldest domain name on the internet.

So what came next?

As we all know, the Web Evolution didn't end in the late 1980s, but was just about to become faster and more diverse every year. Next week we present to you Part 2 of our History of the Internet.