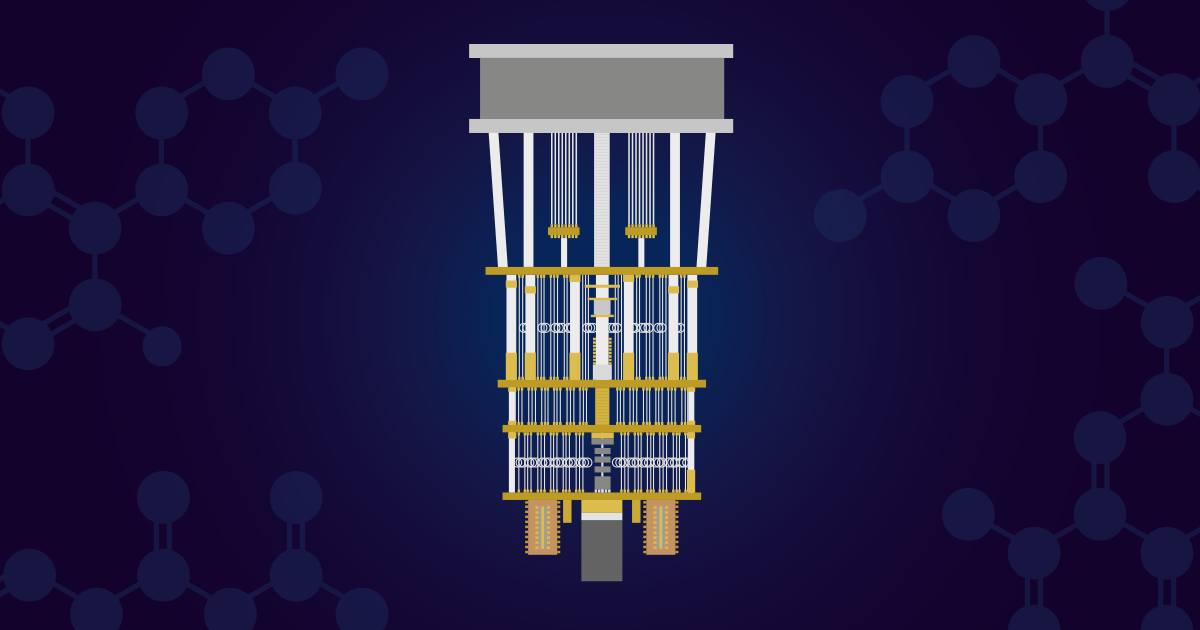 A few weeks ago, I couldn't sleep at night and watched a YouTube talk about quantum computers. I didn't understand a word and the conversation might as well have been in Swahili. At least I fell asleep quickly. The next morning, I thought to myself, "This can't be right. Why can't the subject of quantum computers be explained in a way that even I understand?"

So I read a few things about it. Maybe a few more than a few. I'm still incredibly far from being an expert, but I am confident that I can explain the topic in a way that everyone understands.

The Theory of the Smallest

So now to the decisive question: What the heck is the “quantum” in quantum computers?

Well, at school we all learned that there was this brilliant dude:

In 20th century physics, most of his theories were decisive for the very great things, i.e. for the action mechanisms of stuff, that is incredibly much greater than we are. Like galaxies. But there was another guy, a little less known, but just as important: 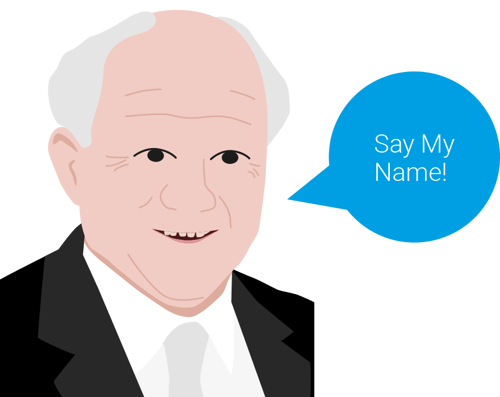 It turns out that "Heisenberg" was not only the star of Breaking Bad, but also a pretty smart German physicist and Nobel Prize winner. The real Heisenberg, aka Werner Heisenberg, lived from 1901 to 1976 and developed the theories of quantum mechanics together with his buddies Max Born, Erwin Schrödinger (you might know his cat), John von Neumann, and some other top physicists. Quantum mechanics deals with the very small things. With the tiniest little particles to be exact. With things in the size range of atoms and below.

To describe it so simply that an even simpler description would just be wrong: Quantum mechanics describes the quantum. A quantum is the minimum amount of any physical entity involved in an interaction. "Quantum" is Latin and can be translated as "how big" or "how much". And that should be read as a question. Because the funny thing about a quantum is that it often leaves us in the dark about how big, how much, or – surprise – what it actually is right now. Somehow a quantum is like a coin spinning on a table. At the moment of turning, it is neither the one side, nor the other, nor the edge. It's kind of everything and nothing at the same time.

A comparison that is challenging to understand: Erwin Schrödinger's slightly maltreated pet mentioned above. He puts his cat in a box. Inside the box, an atom disintegrates under quantum mechanical conditions, at some point destroys a poison vessel with a hammer and when that happens, the cat is dead. Only we don't know when exactly the atom will disintegrate. Until he opens the box again, we’re not sure if the cat will jump out alive, or not at all. In quantum theory, the cat is both dead and alive.

A slightly easier comparison for all men with a girlfriend (admittedly, the comparison could also make sense with reversed genders): You know the situations when you are not sure if you have done something wrong and you ask your girlfriend if she is upset. Maybe it’s because you took the last slice of pizza. Or maybe because you said that her mom gives you the creeps. Whatever it is, you now want a straight answer: Yes or No. But your girlfriend looks at you with that sadistic look and answers: “Maybe”. In this situation, your girlfriend is a quantum.

It's really hard to understand what a quantum is because it contradicts everything that classical physics and our own senses have taught us. I will never understand how a cat in a box can be both dead and alive at the same time, why significant others say "maybe" so freaking often, and why a quantum is indefinable, and yet calculable. But all these phenomena are real. Like it or not.

As for the theory of very small things, a computer that works with the concept of a quantum, or what we define as a quantum, is ultimately a quantum computer.

But how exactly is this kind of abstract stuff supposed to work?

A World within the World

The answer is: By building something a quantum feels comfortable in.

The only problem is that this little fella likes wacky conditions. And in a quantum computer, there's lots of them. A whole lot. At this point, let me introduce the plural of quantum, quanta.

Quanta are not only very small, they also depend exclusively on very cold temperatures. And by cold, I don't mean Starbucks-air-conditioners-cold. I mean cold as in 10 milli kelvin (mK).

At this point, let us throw in what a quantum computer is NOT: a piece of technology that breaks all the rules of physics. Yeah, it looks like Emmett “Doc” Brown built this in his garage to be able to give the dinosaurs a quick hello. But in fact, it is a predictable piece of technology. Admittedly, it works with the most unpredictable things modern physics has to offer, namely quanta. But it is not able to do things that are not allowed by the bigger rules of physics.

Let’s get to the mechanisms of quanta within the quantum chip. Above I brought some examples of a quantum. The cat in the box, maybe dead, maybe alive. The look in your girlfriend's eyes that could mean either "I love you" or "Soon I'll poison your coffee". These special states have a name in quantum mechanics, which is "superposition".

Besides superposition, there is a second core term of quantum computers, and it is called "entanglement".

It's like having two coins spinning on a table. At the moment of rotation, they are in superposition. When they fall, even if it is at the exact same moment, both are identical head or tail. That’s entanglement. A simpler example: You want to have a poker night with your friends and need your girlfriend's OK. So you'll do anything to make her happy. Now she's sitting on the couch looking for a movie on Netflix and suggests something. Remember, you want to make her happy. So no matter what she suggests, be it a schmaltzy movie, be it ten to the power of fifteen times worse than La La Land, you'll instantly say, “Good choice, honey.” Now you're entangled.

Once quanta are entangled, it is almost impossible to separate them again. They now have characteristics that strengthen the assumption that they form a system.

To explain the mechanisms in a quantum chip very simple, you only need both of these terms, superposition and entanglement. Unlike in the binary world of classic computers, quanta do not have to commit themselves. They can be 0, or 1, or anything else, or even anything in between. But as soon as they want to commit themselves, they can easily influence other quanta to behave in the same way. The result is a self-controlling network of quanta that can be used as an information carrier.

But when a quantum computer wants to say "Hi!", it just thinks: 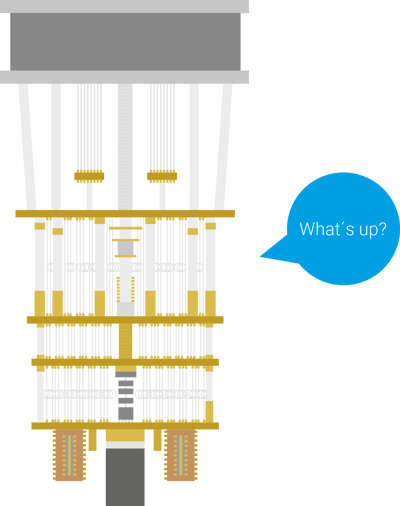 At least kind of. The complexity of possibilities, what a quantum is at a given point, results in variations (with other quanta) that go beyond the rather banal either-or procedure of a binary-thinking PC.

Ironically, a quantum computer is super hard to understand, but its way of thinking is way more humanlike than is the case with a traditional computer. I don`t think, talk, or even text in binary. But the laptop I`m writing this article on does.

I previously introduced the two terms superposition and entanglement. And on a very simple level, you can perfectly describe quantum computers with them. Strictly speaking, however, there is a third term. If you’re not up for more, jump directly to the last paragraph of this article. If you’re curious enough, say hello to "interference".

Interference can be used to monitor the states of quanta. You can strengthen the states that you need for information processing and cancel those that you don't need. Interference is something like the boss of the rebellious quanta. Quanta are unpredictable and are reluctant to being determined (superposition), and if they do fraternize (entanglement), this does not follow any superordinate plan, any purposeful structure. That' s interference's job.

This Kind of Rock Star

Interesting fact, Einstein never received the Nobel Prize for his theory of relativity (with which the very great can be described), but for his investigations of the very small (more precisely for his discovery of the law of the photoelectric effect). It is probably no exaggeration to say that the quantum, this annoying little fella, has been the rock star of physics from the 20th century to the present day.

And that we can't understand the quantum with common sense has only increased its market value. This rock star sells concert tickets like crazy, where respected physicists faint like hysterical, screaming groupies. Another Nobel Prize winner, the German physicist Max Born, once complained about the passive aggressive attitude of this rock star in a letter to Einstein: “The quanta really are a hopeless mess!” (in German: “Schweinerei”). Which was just a 20th-century-style of saying: 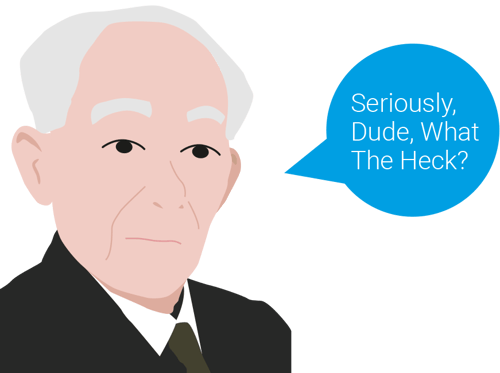 Now, are there any more question marks in your head? Then wait for the second part of this article, titled "Quantum Computers: What They Can (and What They Can Not)". In it, I will show practical use cases, tell you what a "qubit" is all about, and reveal the greatest myths that exist about quantum computers.

Remember, to really understand quantum mechanics, you'd have to be an absolute alien. We humans cannot understand it like classical, tangible physics. However, after the second article at the latest, you should be able to really show off in an intellectual conversation with your drunken friends – otherwise I failed my job.