Blog Home > We Measured the Air Quality on New Year's Eve, and Here's What We Found 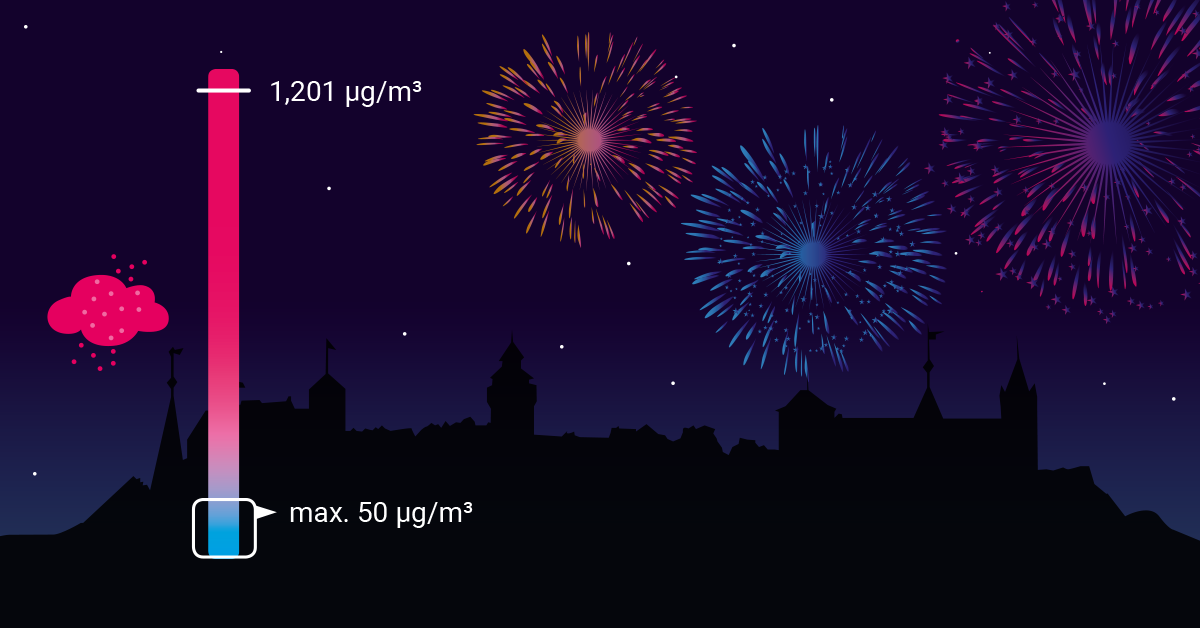 We Measured the Air Quality on New Year's Eve, and Here's What We Found

2019 is here, and as the smoke (quite literally) settles on the New Year's Eve celebrations, it's time for us to take a look at the results of a little experiment we ran. We set up a particulate matter sensor to monitor air quality as the fireworks went off over Nürnberg on New Year's Eve, and as expected, we saw a spike. But how serious was the spike? And what does it mean for cities and their air quality levels overall?

Before starting, let me describe what New Year's Eve in many European cities is like: Unlike in regions where each city has one large fireworks display, civilians in several European countries are permitted to purchase and use fireworks themselves (in addition to the organized fireworks display of whichever city they live in) on New Year's Eve. The result is something akin to a war zone when midnight strikes: night skies lit up in a panorama around you, with explosions, flashes, raining fire drops...and smoke. Lots of smoke.

It was this smoke that had us wondering: just how bad are the pollution levels from these fireworks? And what is the grander impact of it?

How Air Quality is Measured

Increased regulations in recent years have meant that cities need to keep closer tabs on their air quality levels. To do this, they measure the levels of particulate matter—also called "fine dust"—in the air. Particulate matter could be anything from pollen or dust particles to smoke particles and ash. Since not all particles are created equal, the ones of particular interest are the inhalable coarse particles with a diameter of between 2.5 and 10 micrometers (known as "PM10"), and fine particles with a diameter of less than 2.5 micrometers (known as "PM2.5").

Particulate matter level is measured in micrograms per cubic meter (µg/m³). The World Health Organization (WHO) has identified anything above 25 µg/m³ for PM2.5 and 50 µg/m³ for PM10 as dangerous levels.

What we did for our experiment was put together a particulate matter sensor, and then hook it up to PRTG Network Monitor. This allowed us to collect data over New Year's Eve so we could analyze it later. 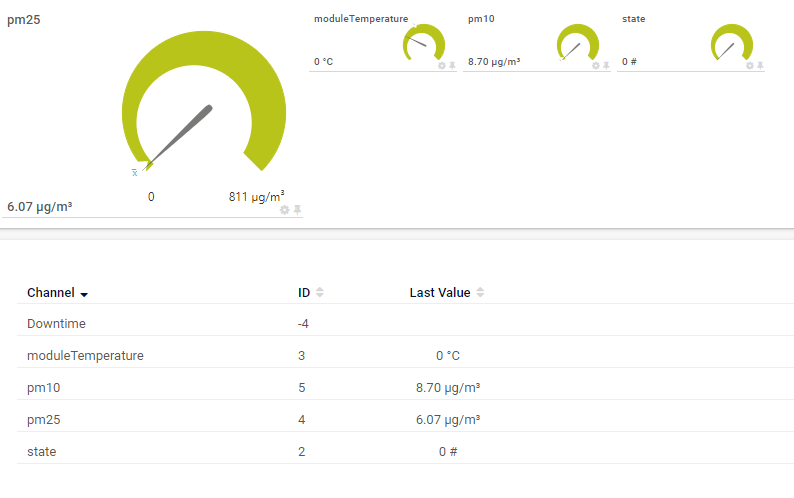 And then we went out and partied while the sensor and PRTG did all the work :)

Obviously we saw a spike. You can't shoot that much potassium nitrate, sulfur and an assortment of metal compounds into the atmosphere and expect there to be no effect. This is what the PM2.5 (in light purple) and PM10 (in olive green) levels looked like on New Year's Eve:

Interestingly, we think that we exceeded the sensor's PM10 abilities, so the PM10 levels could actually have been higher. At any rate, you can clearly see a gradual rise from 22:00 (already above the WHO recommendations) until the big spike at midnight. At the peak, we saw a PM2.5 value of 811 µg/m³ and PM10 value of 1201 µg/m³. That's 32 times and 24 times higher than the "safe" values for PM2.5 and PM10 respectively.

Perhaps the most surprising (at least for us) was how quickly the levels dropped. While they were still pretty high at 1am (484 µg/m³ for PM10), both PM2.5 and PM10 levels were back at "acceptable" levels by around 5am on New Year's Day.

Watch us take a look at the results here:

Putting It Into Perspective

So what do these massive levels of particulate matter over a short period of time mean in the bigger picture? Surely it is massively destructive to our environment? And there must be a big impact on general health, right?

Well, it might actually not be as bad as it seems. Despite the general media's penchant for running with the admittedly sensational numbers, the effect on the environment and on health should be seen in context. The levels recommended by WHO are averages. Take PM2.5 as an example: the WHO guideline value is a maximum of 25 µg/m³ averaged out over the entire day. Based on our measurements on 1st January 2019, the average was around 45 µg/m³ over the entire day. However, the health risks to healthy individuals are very small over a period of 24 hours. You might feel a little scratchy in your throat, but that's really about it.

It's only over extended periods of time that high levels of particulate matter become a health risk. This is why it is more beneficial to look at the annual average. And as it turns out, one day of fireworks is not enough to create a significant rise in particulate matter levels over an entire year.

That's not to say that the short-term period of concentrated levels of PM2.5 and PM10 are acceptable for everyone; rather, people who have specific health predispositions—such as asthma or certain heart problems—are at a much higher risk during these times of poor air quality.

So if it's not so dangerous, is it OK to be firing fireworks willy-nilly into the air? Well, just like the figures need to be taken in the context of a bigger picture, so does the argument for or against legalizing fireworks for specific celebrations, like New Year's Eve in Europe, Diwali in India, or Independence Day in the United States. 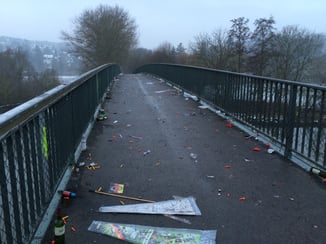 Air quality is just one part of the picture. If you take a walk around most European cities on the morning of New Year's Day, it looks as if a giant trash can exploded and deposited bits of rockets and general detritus everywhere. If you count the number of injuries from fireworks that emergency wards see on New Year's Eve, you'd run out of fingers. And then you can factor in the danger to vulnerable individuals and the fact that animals are downright terrified of the fireworks.

In Europe, recent years have seen a move to ban older diesel vehicles in the center of several major cities. When you consider that the amount of particulate matter released into the atmosphere on New Year's Eve can be equal to as much as 15% of the total fine dust produced by vehicle emissions, the reasoning starts to become a little murky: if you're going to the lengths of banning vehicles, you may as well take the extra step and ban individuals with fireworks, too. After all, surely every little bit counts? And there are alternatives to fireworks, as Mexico City demonstrated with its New Year's Eve laser light show.

So while you maybe can't build a super-solid argument for banning fireworks based on air quality figures alone, when you take all the factors into account, you have a lot of compelling points against even one night of pyrotechnic fun.

Figure It Out for Yourself

But hey, the stuff in that last section is just this writer's opinion. I am a big proponent of figuring it out for yourself. So don't let me tell you what to do about fireworks on New Year's Eve. Measure for yourself! If you have the technical ability, build your own particulate matter sensor like we did on our Maker Monday show. Or buy one ready-made. And start measuring now! Take regular air samples throughout the year, and collect the data for analysis. Once you have a full data set, evaluate and interpret it for yourself. And then decide how you will be celebrating the turn of the decade in 12 months' time...

What are your thoughts on fireworks and their effect on our environment? Did you fire off your own fireworks on New Year's Eve? Am I being a total buzzkill by suggesting that we ban them? Let me know in the comments!