With our recent focus on industrial IT, we've previously written about how PRTG and INSYS icom smart edge gateways can be used together. Now we want to go more into detail about a potential use case for getting data from the factory floor to PRTG using an INSYS icom gateway and Node-RED. But first, it makes sense to take a look at the INSYS part of the equation, which is what I'm going to do in this article. In a future post, I will take a look at how to get data into PRTG, so make sure you subscribe to our blog!

Cloud. It’s everywhere. From exabyte scale data lakes, to smart refrigerators and connected “personal massagers”, there seems to be no limit to the applications for cloud computing. Now, there are undoubtedly benefits to moving workloads off premise – scalability, resilience (mostly) and reduced capex costs, to name a few. But what if your use case is more complex than an Office 365 migration, or moving your application servers into AWS?

What if you need to crunch data from hundreds, or even hundreds of thousands of connected devices? – A not uncommon requirement in the IoT / IIoT world. How do you efficiently and cost effectively collect and process data from large numbers of, possibly widely distributed, sources? 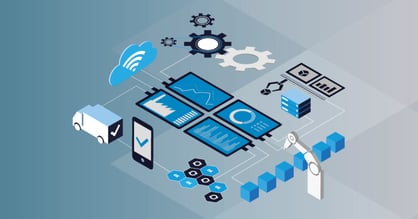 Sure, you could configure each device to connect to your backend systems directly. That would be logistically challenging if the backend was “on-prem”. If it was in the cloud, it would be a potential nightmare. Not to mention risky from a security perspective and an expensive and inefficient use of bandwidth.

So, what’s the alternative? Given that you need to route the collected data to the backend, whether that’s on your network or in someone else’s cloud, wouldn’t it be cool if you could aggregate the raw data, or even pre-process it at that routing point, before shipping it to the great-data-lake-in-the-sky™? Being able to do that could dramatically reduce complexity, and transaction & bandwidth costs. Welcome to edge computing and smart gateways.

Recently, I’ve been testing one of their MRX3 gateways. The MRX series are DIN mountable, modular smart gateways that come in two sizes – the smaller MRX3 range have three modules, or slots, and the larger MRX5 range have five slots.

It’s these slots that make the devices so useful. Because they can be populated with additional interface cards, to suit almost any requirement – additional copper switch ports, SFP fibre connectors, WLAN, xDSL interfaces, 4G modem, serial connectors, there’s even a multi I/O card with analogue and digital inputs and outputs.

I’ve been working with an MRX3 LAN device, configured as a router, segregating a test OT network from my main LAN.

Each of the physical interfaces can be configured for different purposes and multiple protocols are supported: 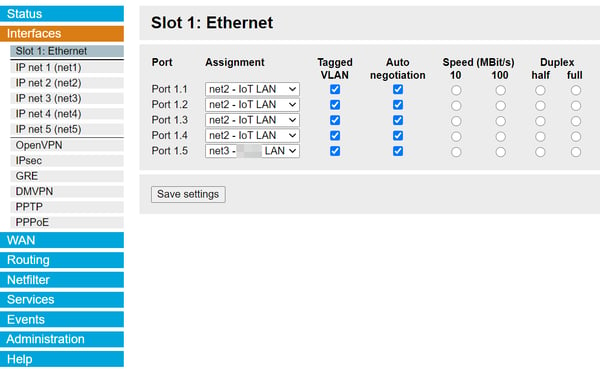 The MRX wouldn’t be much of a router if it didn’t allow the data passing between networks to be controlled, but the built in Netfilter feature has that covered: 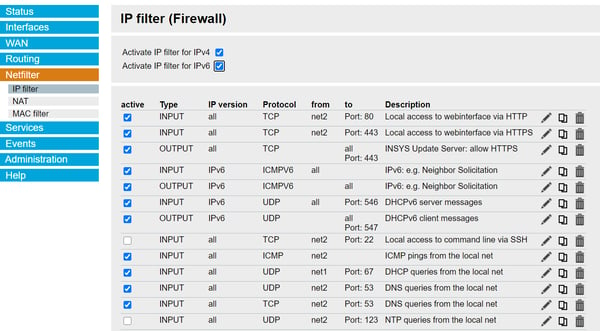 The operating system on the MRX is called icomOS, which is a hardened Linux derivative, and one of the most interesting features this provides is “SmartBox”, which allows LXC containers to be hosted and run directly on the device. This capability elevates the MRX from being a simple router, into an intelligent “smart edge gateway” that can process data collected from the devices it connects.

INSYS icom have a library of containers available on their site including - software PLCs, MQTT broker, Modbus-MQTT protocol converter and BusyBox containers, as well as developer specific tools such as Git, Python and even a couple different containerised Linux distributions for writing and hosting your own custom applications. There’s also our own “Node-Red PRTG Network Monitoring Edition” container, which will be the subject of another blog article in a few weeks.

iDS can act as a protocol converter. For example, collecting Modbus or Siemens S7 data from PLCs and RTUs and converting it to MQTT or OPC - Package 3 “Flexible+” even includes an OPC UA Server to simplify the process even further. The Data Suite can also read and process data from the analogue and digital I/O cards installed in the MRX chassis slots.

Any collected data can be processed, displayed on internally generated dashboards, compared to thresholds, used to calculate KPI metrics, or forwarded to other systems. A typical use case might be:

This ability to run services or applications on the MRX devices enables data to be efficiently and cost effectively collected, processed and distributed to any environment, be it OT, IT or IoT.

Look out for another post, coming soon, that shows how you can use our “Node-Red PRTG Network Monitoring Edition” container to export health and performance data from your INSYS icom device into PRTG.