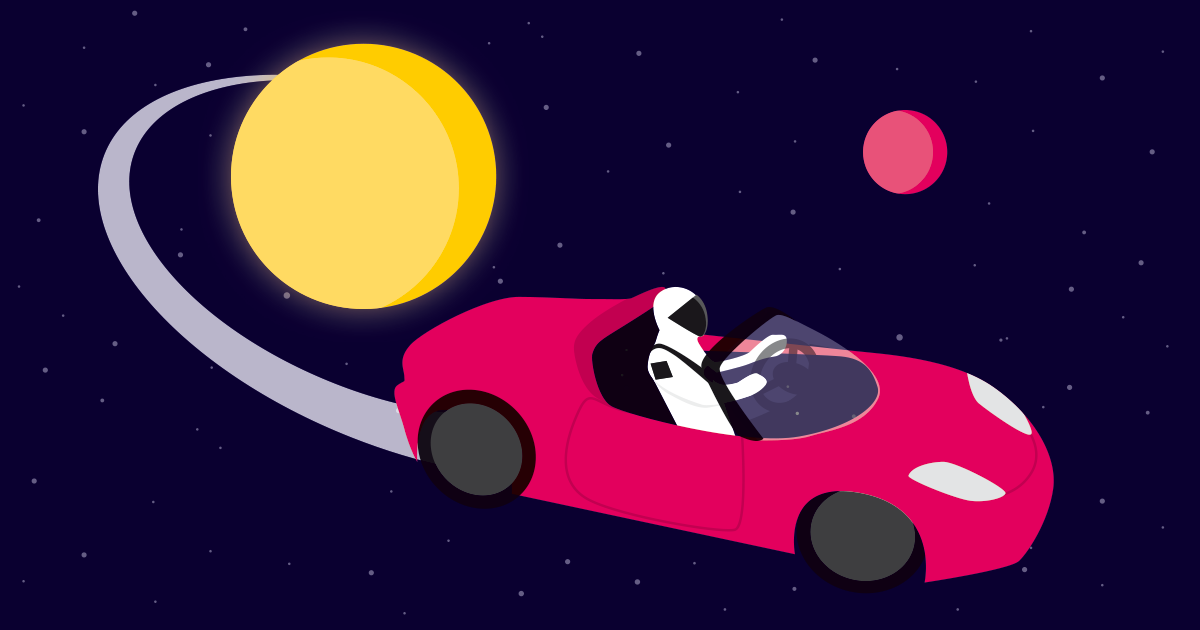 Right at the beginning of the second quarter of 2018, Elon Musk's Tesla Cabriolet broke the 25,000mph speed mark. That's pretty much the maximum speed the Roadster can reach in space on its orbit around the sun. This measurement, along with other data from the Tesla, has been continuously transmitted from space since February 6, 2018 by our PRTG Remote Probe.

Let us look back to late Autumn of 2016, when we had our first contact with Elon Musk. Back then, the launch of Musk’s first rocket – originally planned for 2013 – had been delayed a few times. Musk was still looking for a way to track various details of the trip, and he got to talking with us. Convinced that we could provide all the necessary technology and data using our PRTG Network Monitor, he let us in on the secret: his cherry red Tesla Roadster was going into space, and he wanted us to monitor it!

After several meetings with various SpaceX experts, the actual work began on this bold idea. A project team of only a few Paessler employees was formed. The first brainstorming session ended with a meeting room decorated with post-it notes. Hundreds of questions had to be answered.

At this point we would like to express our sincere thanks to the entire SpaceX team, who were always open to our questions and supported us wherever possible. Thank you so much guys!

Our project team quickly found answers to many of the questions.  Basically, a device with low energy consumption on earth functions exactly the same way in zero-gravity. Although we didn't have the capability for conducting practical tests, the SpaceX team with their many years of space experience helped us to quickly check off most of our open points. As early as August 2017, we produced a fully functional prototype that could successfully monitor 90% of the available Tesla sensors.

The final obstacle was the approval of our remote probe by the SpaceX security experts. Despite Elon's vote of confidence, they needed to be sure that we would not infiltrate malicious code to sabotage the project. The hardware was very thoroughly examined by the SpaceX security team. After 8 weeks of anxious waiting, we got the go-ahead at the beginning of November 2017: Everything was acceptable, our PRTG Probe had been approved, and nothing stood in the way of installation!

The final tests were done in Nuremberg, and then we sent our probe to SpaceX headquarters in Hawthorne, CA.

On February 6th, the time had come. I've seen a handful of space shuttles and a Mars robot leave our planet, but Falcon Heavy's maiden flight blew them all away. In a picture-book launch, Falcon Heavy took off with the Tesla at 20:45 UTC towards the infinite expanses of space, with the Tesla, the dummy "Starman" in his space suit, and our PRTG Remote Probe onboard.

The next few minutes were a stress test for our nerves. Every employee at Paessler HQ had positioned themselves in front of one of the televisions as we eagerly awaited the sensor data. During those minutes – which felt like hours – we had many questions:

The tension soon gave way to relief and joy as the probe began delivering sensor data to our Tesla Dashboard in 60-second intervals. We were amazed by the low temperatures and the increasing speed of the Tesla. For a non-spaceman, it's always exciting that even at 3,000mph, the wind speed can be nonexistent, thanks to zero-gravity! 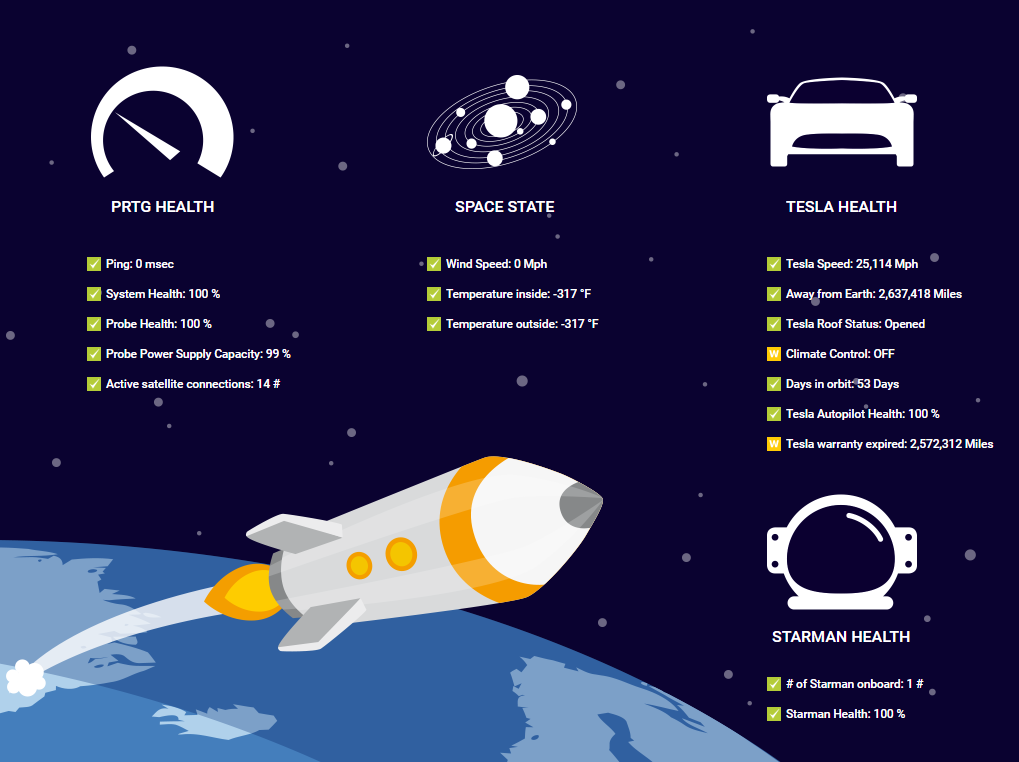 As announced earlier in this article, today the Tesla broke the speed limit of 25,000mph. The other sensors also still deliver reliable data, although we are still not sure about the anemometer, which has shown 0mph during the entire voyage so far! :-)