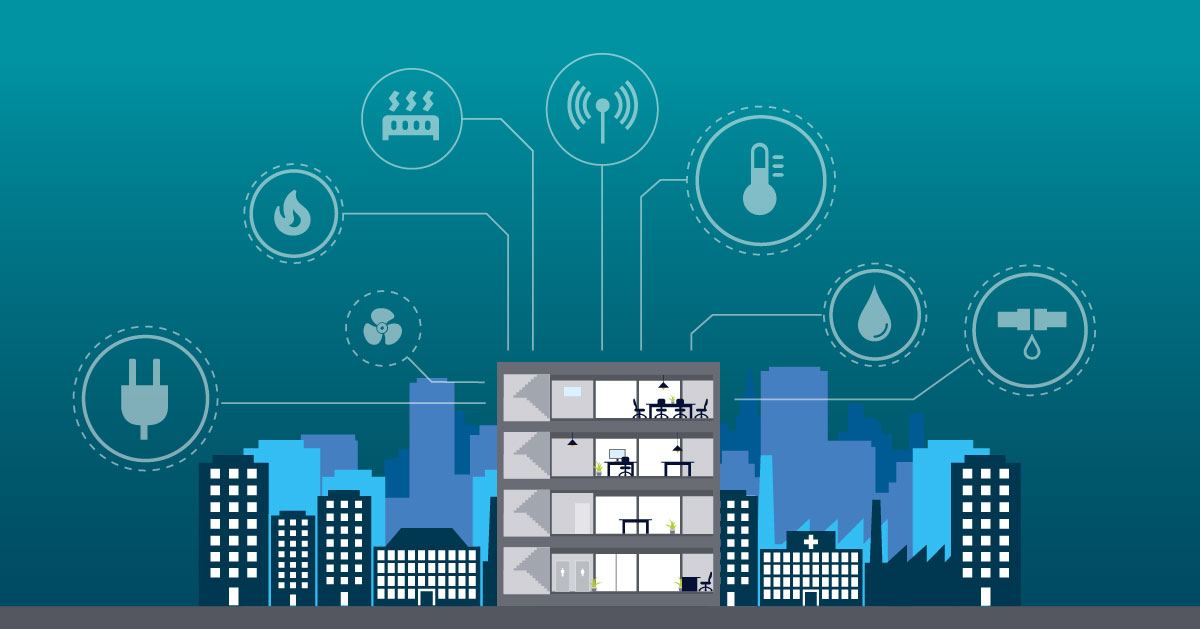 Gateways gain importance when there's communication happening between multiple buildings, mostly in the form of "outdoor gateways", but there are also use cases and specific needs where gateways get installed indoors (particularly thick walls are a striking yet annoying practical example).

As mentioned above, the two key thoughts of modern building state monitoring are manufacturer independence and open systems. To provide smooth communication of different protocols, various gateways from many manufacturers are available today. With these, you can integrate and connect, for example, any Modbus RTU or TCP server device (or both at the same time) with a BACnet BMS, BACnet IP or BACnet MS/TP controller. The goal of this integration is to make the signals and resources of the Modbus system accessible from a BACnet-based control system or device as if it were part of its own BACnet system, and vice versa.

Cable is still the classic connection method, although there are various exceptions to this statement, depending on how and for what purpose a building is constructed. For this classic form of communication, cables have to be laid in the house, which can of course also be installed later when a house is modernized or renovated. But the necessary cables and lines require plenty of space. It is necessary to consider in advance which sensors and systems are generally required at which location. Connecting additional devices, however, is possible without any problems. In addition, cables are considered very stable. This means that there are no problems with the range or with neighboring radio networks, as might be the case with wireless solutions.

There are just about no communication solutions that are based solely, completely on WiFi. The fact that cloud-based home automation systems no longer function if the Internet fails is a strong argument in favor of cable and LPWAN.

So here are the three big players that are relevant in the field of digital transmission in building state monitoring: LoRa, Sigfox, and MIOTY. The differences between those three can be subtle but crucial for the success of different installation scenarios.

i😵 LPWA(N) ... stands for low-power and wide-area. It does not refer to any one specific technology, but rather serves as a generic term for any network designed to communicate wirelessly with lower power than other networks such as cellular, satellite, or WiFi. Moreover, LPWANs communicate over greater distances than other low-power networks that use Bluetooth or NFC, for example. Read more ...

LoRa is a data transmission technology that was acquired by chip manufacturer Semtech in 2012. It offers relatively good bandwidth compared to other LPWAN technologies, but requires the use of Semtech chips. LoRa has gained momentum in the European market, and today there are a series of applications. The network infrastructure itself for LoRa must be built, as is also the case with MIOTY - but not with Sigfox. This means that LoRa and MIOTY are only of interest for projects that have a spatial boundary; anything else would have extremely high additional costs due to infrastructure and staff. Having to build the network infrastructure avoids dependence on network standards (with Sigfox, you are dependent on network standards).

The data transmission technology from French company Sigfox is best suited for application concepts with extremely low bandwidth and highly constrained energy budgets, since the transmitters are self-contained and do not rely on a power supply. They transmit data reliably and with an absolute minimal maintenance effort. Examples include container tracking, concepts such as the “smart trash can” or tracking luggage. The special thing about Sigfox is that it is a completely standalone network for IoT devices. Currently, the infrastructure is fully functional in 73 countries, connecting more than 5.7 billion people. It is an open standard that operates on sub-GHz frequencies (between 868 and 928 MHz) and can be used by any wireless carrier.

The MIOTY software solution from the Fraunhofer Institute uses an efficient channel encoding scheme that increases its range by a factor of 10 compared to conventional 868-MHz wireless systems. Since it creates little self-interference, the system can simultaneously support up to a million transmitters. Whereas, solutions like Sigfox send complete data packets, MIOTY splits them into sub-packets (called telegram splitting). Transmitters are based on conventional chips from manufacturers such as Silabs or Chipcon, and they stand out due to their compact design and extended battery operation of up to several decades. The receivers, which are equipped with digital signal processors, are characterized by a flexible design that allows them to be tailored to specific customer applications; they can be used for both stationary and mobile applications and can be optimized for both environments.

In addition to the protocols presented in part 1/2 (all relevant for wired installations, if you leave aside the rather elaborate use of bridges), there are two very relevant wireless protocols listed below that are worth knowing.

ZigBee is a wireless standard for home and commercial use, developed by the ZigBee Alliance, which was established in 2002. A major feature of ZigBee is its mesh network topology that is self-healing and auto-routing. That's because Mesh networks do not depend on any single connection; if one link is broken, devices search through the mesh to find another available route. This makes a network based on ZigBee more reliable and flexible.

EnOcean was originally developed as a (commercial) venture of Siemens AG. It became an open protocol in 2008 when the EnOcean Alliance was formed. The standard specifies the use of energy-harvesting technology that does not require batteries or other power sources. The typical applications in building automation are for example for lighting controls and sensors.

Okay, that was our brief two-series overview of protocols, gateways and data transmission methods for building state monitoring. It obviously didn't discuss all protocols and data transfer methods that might be relevant in the monitoring projects you come into contact with, but it hopefully gives you a good, first understanding of the mechanisms in place. We did not get too technical talking about synchronous or asynchronous transmission, serial transmission, modulation, baseband, any security issues, or stuff like that. Also, the list of the 3 LPWAN players may be complemented with some other names, depending on your location and, again, your specific requirements. Monitoring building state data requires so much more than a building and a computer. Please check out our brand new solution page and comment any specific questions you might have under this article.