Cloud Computing – Combined with BYOD – Is Changing SMB IT Forever

When you open any IT news website nowadays you can read a lot about the future of IT in the cloud. The trend to move applications and data to the cloud is not just smart marketing from the big three cloud companies (Amazon, Microsoft and Google). It has many serious advantages which are especially important for businesses: cost, agility, manageability, security. So, how far has cloud acceptance come, especially for SMBs?

In February 2017, Paessler asked IT administrators about their acceptance of the cloud.

Compared to two other studies that have been published recently: Rightscale's "State of The Cloud 2017" report and Intel Securities' report "The state of cloud adoption and security", our results show a clearly different picture.

The group of people included in the three reports show some differences:

We consider companies with fewer than 500 employees to be SMBs, meaning the Paessler Cloud Acceptance Study has the broadest data set for smaller companies, compared to the other two, which focus on larger companies.

This is clear in the basic cloud usage data gathered from these three reports:

Note: The Intel report throws usage and "planning-to-use" for private cloud and public cloud into one bucket.

We have asked the participants about their acceptance for specific cloud services: 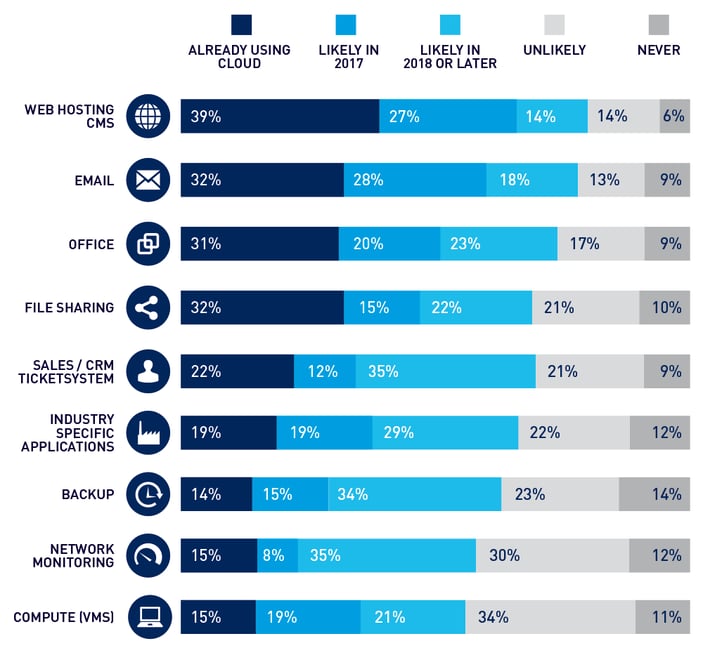 We found the highest acceptance for cloud services was for web hosting (80%) and email (78%), followed by office applications (74%).

Running virtual machines (VMs) in the cloud is only accepted and planned by 55% of our survey participants.

For all other applications between 55 and 70% of the participants of our respondents are using the cloud or will be using the cloud within the next few years. This will certainly change the way those IT administrators work in the coming years.

It is not the intention of this article to talk about why the world moves its computing stuff into the cloud. My point is that this migration is inevitable and already underway. All three surveys indicate that not only Fortune 500 companies are going cloud, SMBs are also on their way.

The cloud will take over most of what we experience as "Internet" and "networks" (for consumers this is already the case, your smartphone is a dead brick without the cloud). Of course, as admins that manage a local area network with switches, copper cables, and one or more data rooms know, a good part of their work and hardware will not go to the cloud anytime soon. So, we will all have to live with a mixture of public and private cloud: Welcome to the hybrid future, where some data is on-premises (or in your own data center) and some data is in the cloud.

In this context we use a fairly broad definition of "cloud" meaning everything that is NOT running on-premises or in your own data center. If an application, service, or storage is running on hardware/networks that you are NOT managing yourself (and you access them via the Internet) we regard this as "cloud" (PaaS or IaaS on a public or private cloud), especially when you do not even manage the application and operating system (Software-as-a-Service). Consequently, for me "hybrid cloud" is an IT setup which mixes workloads and services in the cloud ("public cloud") and in one's on-premises network ("private cloud") into a mixed network.

Almost Certainly Your Organization Is Already Using The Cloud, Too

You may not use Amazon's or Microsoft's cloud yourself, but today almost every Internet user uses cloud services. All mobile phones are constantly talking to the cloud. In many departments SaaS services like Dropbox, Salesforce, Office 365, Google Apps are used all the time. Most new, cutting edge software applications (Big Data, AI, etc.) are not even available on-premises anymore - the vendors create and offer SaaS versions only, which pushes cloud adoption further.

We asked the survey participants about their usage of the big-three cloud providers, and received the following results: 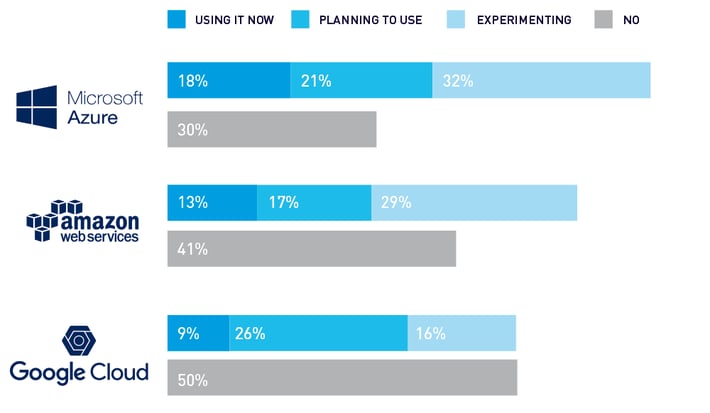 Drop Your "No Cloud Policy" (If You Still Have One), Embrace Shadow IT And Consider It Your "Hybrid Cloud"

Some administrators would consider cloud applications a part of "Shadow IT" (e.g. quite often departments bought SaaS services without asking IT) and would like to turn it off, but cannot do much about it, because these cloud services are already a fundamental part of everyday life in the offices, the company couldn't do without it. In a survey, cloud security broker vendor CipherCloud found that 86 percent of cloud applications used at workplaces are unsanctioned.

So-called "no-cloud" policies will become as rare as "no-Internet" stances in the near future. The company IT has effectively lost control over the applications because people and departments are saying "I can go to the Web and get an application or a service within minutes and start being productive, why bother with the admins?". I am not in any way suggesting that this is the right thing for them to do. Many users are simply not even aware of security risks or organizational side-effects; this is an educational/organizational challenge. To cope with this challenge, some organizations have therefore established a catalog of approved cloud services that users can select from without lengthy agreement from IT.

BYOD, the "sidekick" Of The Cloud: Who Still Needs Copper-Based Ethernet When Everybody Is Using Cloud applications?

As soon as most day-to-day applications are moved to the cloud you can use them there using your mobile phone or laptop via Wi-Fi. Security and access control are moved and off-loaded to the cloud. Few applications really need so much bandwidth that it can't be provided by a modern 802.11 wireless LAN. If you don't work with 4k-video editing or lots of 40 megapixel photos all day you are happy with Wi-Fi. Nobody actually needs an Ethernet-based LAN for email, office, or a CRM anymore.

Microsoft Shows Us The Future of Wi-Fi & BYOD

Consequently Microsoft announced last August that they are ditching copper-based Ethernet in 660 campuses in favor of Wi-Fi only offices over the next 24 months.

"Our users don't simply use a workstation at a desk to do their jobs anymore. They're using their phone, their tablet, their laptop, and their desktop computer, if they have one," said a Microsoft manager in a Q&A published in the Microsoft Azure Blog. "It's evolved into a devices ecosystem rather than a single productivity device, and most of those devices support wireless. In fact, most of them support only wireless."

quote by David Lef, Principal Network Architect at Microsoft IT.

Microsoft expects that moving from wired infrastructure to BYOD -first/ Wi-Fi -first will reduce their pile of networking equipment by 50%. Of course some of their sites will remain copper-based, e.g. labs, data-centers and other special use offices. But in the end they expect that 90 percent of its end-user network infrastructure will be pushing packets over wireless signals. And they combine this with their mission to migrate 90% of internal IT to the Azure cloud. Microsoft's IT teams plan to migrate 90 percent of the company's computing resources to Azure by July 2017, anticipating a 31 percent increase in Azure workloads from its current footprint of 20,000 Azure virtual machines, 110,000 cores and 1,500 Azure-based applications.

We asked in our study: "Some analysts describe the future of office computing like this: In a few years Wi-Fi networks will become the most used network access method in offices - while copper-based Ethernet networks will decline (or will even be replaced in part by Wi-Fi). Employees with BYOD/mobile devices will use cloud applications via Wi-Fi rather than on-premises applications and file storage. Microsoft, for example, has already converted hundreds of campuses to Wi-Fi-only offices while moving 90% of their computing/storage capacity from on premises into the cloud. When do you expect your organization to start following this path?"

Here are the results:

Only 16% do not expect the cloud to be their future, but the rest agrees that BYOD and cloud will be their IT future.

At Paessler we moved into a new office last April and we rolled out a "dual network": a copper-based and Wi-Fi -based network throughout the whole building for our 180 employees. Most of my colleagues are using stationary PCs, but more and more of them are migrating to iPads, Surface tablets and MacBooks which use our Wi-Fi network. They use them in meetings, in quiet-working rooms, and when they return to their desk, some plug in stationary monitors and keyboard (or use a docking station). And all my colleagues have a smart phone at arm's reach all the time, too. They all use our Wi-Fi  network. We even installed an access point in our beer garden where we hold outdoor meetings in the summer.

We found that this approach helps us in our day-to-day life, people working together at projects meet more often, move around the building more often (without IT re-plugging cables) which results in better communication and better results.

Over the next few years the combination of these two trends will drastically change the work and environment for system administrators around the world and in all organizations. Depending on the usage rate and types of applications this process will move faster or slower for every industry and organization. And there will remain a small set of applications that can't be moved to the cloud for various reasons.

But I think it is clear that this trend is already under way and will touch all organizations and companies in the near future. IT admins need to build up cloud knowledge, understand the security and reliability implications.

At Paessler we have had a "Cloud First Policy" for some years now. The initial reasoning was that as an infrastructure vendor we should arrive to the cloud early so we can prepare our services and our products for the cloud. We wanted to be ready when the majority of our customers start heading for the cloud. Now we have built up more and more cloud knowledge which enables us to work with the cloud in many aspects of our daily business. What we can conclude: It was worth the effort!