It's that time of year again: Cisco Live is in Berlin next week for its annual Europe edition. If you're about to pack your bags for your trip to Berlin just like we are, you probably can't wait to join all the sessions and programs for some major technology inspiration.

Obviously schedules can get quite packed during conferences like Cisco Live, so it's always nice if you've got a chance to unwind a little after such a long day. While there are plenty of social events on site, you'll want to explore Berlin a little while you're there and while you're at it, why not sample some fantastic beer? No problem at all! Especially if you've got somebody like Theresa to guide you to the most extraordinary craft beer places in town. She is the most avid craft beer geek you can possibly imagine, and I'm thrilled she shared her personal top 5 spots in Berlin. 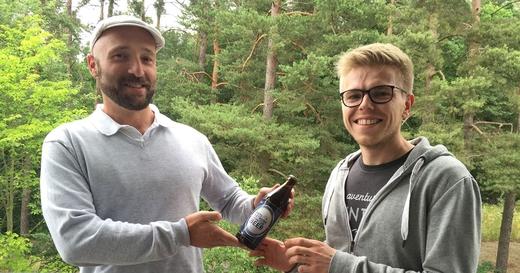 Not quite Berlin, but for sure one of the best beer places in Nuremberg: Our balcony. ;)

Stone Berlin is located at the site of a historic gasworks facility in the Mariendorf neighborhood of Berlin. The brewery's first location outside the US is pretty overwhelming with its 2.400 square meter main hall and neighboring garden that fit not only 1.200 guests but also 50 taps. The atmosphere is beyond compare, with rocks and trees spread throughout the restaurant, fireplace seating and a waterfall table from which you have the best view over the brewery. Not only do they offer a broad range of craft and artisanal beers but Head Chef Robert Hilges also serves a world-inspired but locally-sourced menu. Don't miss the Stone Xocoveza Mocha Stout or the Stone Ruination Double IPA while you're there. Although it's located a little outside of the city center Stone Berlin is definitely worth a visit!

Monterey Bar is a craft beer and Rock 'n' Roll bar in the heart of Berlin's Prenzlauer Berg neighborhood. They offer a selection of eight different draft beers and a lot of bottled beer. Like A LOT. Their comfy sofas and a selection of 80's games consoles might convince to you stay a little longer than initially planned. But who could blame you given that you'll have to try at least some highlights of their ever-changing bottled beer selection? If you're not sure what to order, ask their friendly bar team, they'll be happy to help!

Brlo is a brand-new craft beer bar on Schöneberger Straße 16. It combines restaurant and brewery and is located in a one-of-a-kind building constructed from 38 shipping containers. Their beers are brewed with artisanal qualities in small-scale batches. Brlo has been around since last summer with a beer garden and since people just loved them it became obvious they were meant to stick around. What to drink? Brlo Weisse!

Located in Berlin Mitte, Kaschk is designed to spend the whole day, because it's not only a Scandinavian craft beer bar but also a coffee shop with a shuffleboard. So if you need an early morning kick-start before heading to #CLEUR, Kaschk is the place to be. If you prefer to go for a beer instead you can choose between their delicious draft beers. Most of them are from Denmark, Sweden and Norway, which are some of the most interesting beer markets at the moment. Your hoppy treat of choice is their To OI.

Brewdog Berlin is also located in Mitte and it's the Scottish brewery's German subsidiary. Their beer menu offers 30 draft lines from across the globe. If you're feeling hungry the Brewdog folks have got you covered with pizza to die for. You'll find anything from entry-level craft beers to international specialties. Soak up the great atmosphere and go for one of the Buxton and Omnipollo Ice Cream Series bottles. They usually run out quickly, but feel free to ask the super knowledgeable bar team for alternatives.

We wish you a great Cisco Live and hope you get to enjoy some beers too. If you've been to one of the places recommended above, we'd love to hear how you liked it.