In March 2021, as a participant in Starlink's European beta program, I received a ground station and installed it on the roof of my house. Here are my observations after monitoring it for almost a full year.

The Starlink antenna booting up:

You do need to monitor this kind of thing!

As the founder of a company that sells network monitoring software, of course I  monitored the performance of this internet connection from the start. A remote test by my Paessler PRTG monitoring software uses various sensors to monitor the bandwidth and quality of the satellite connection.

Now that I’ve got monitoring data from the last 10 months, let’s take a look at what we can find out from it.

In addition to the Starlink dish, I have two copper-based internet connections (Vodafone cable internet 500 Mbit/s and Telekom VDSL 50 Mbit/s) connected to a Unifi Dream Machine router. The router automatically switches between the two, depending on which access path is faster at the moment or if one is disrupted. This works great, by the way!

The question is: Could Starlink be an alternative to one of the two access paths? That would mean Starlink would have to run faster and/or more stably than one of the other two.

How stable is the connection?

I used a PING sensor that sends 50 pings every 60 seconds to server 1.1.1.1 (the Cloudflare DNS server) and then determines the min/avg/max values of the ping times and calculates the packet loss. Here are the results as daily averages:

The Starlink connection clearly has the greatest variance in its values, which is certainly also due to the constant movement of the satellites and the availability of sensors in the visible part of the sky. The mean value of PING fluctuates between 30 ms and 40 ms, and the maximum values are around 50 ms. In September, it seems like there were some problems. Since October, the mean values have settled at around 40 ms. There’s a constant packet loss of 0.2 - 0.6%, but it’s bearable.

The Vodafone connection clearly shows the most desirable properties. In this comparison, it offers the best quality for internet access: very constant ping times (15 ms on average). We see four phases with packet loss: In three cases a power on/off on the cable splitter and the Fritzbox modem router fixed the problem, and once Vodafone fixed the problem on their network.

In this regard, the Telekom VDSL connection is the most questionable product here: For a copper-based connection, the variability of the values is far too high, and there are repeated phases with packet loss in the range of 5-10%. That’s really bad. I didn’t pursue any further why that might be the case.

Here are the totals for the last 10 months:

For hardcore online gamers who need very short ping times, the two wired connections at 16 ms and 22 ms ping times are of course better. But for anything else, you should get by easily with Starlink at 36 ms. Alternatively, a 4G/5G connection should only be able to compete with this if the connection is optimal.

How fast is Starlink in Germany?

First of all, this has to be said: Measuring the available bandwidth of an internet connection is always problematic. You shouldn’t take the following values as academically precise, but rather use them to see the change in bandwidth over time.

The following graph shows the bandwidth that I measured with an HTTP sensor. A 3 MB file from my blog (Wordpress CDN Server) was downloaded every few minutes. From the loading time and the file size you can calculate the available bandwidth. This is definitely less than the bandwidth that was actually available, but it gives us a minimum value for what was going through the cable. 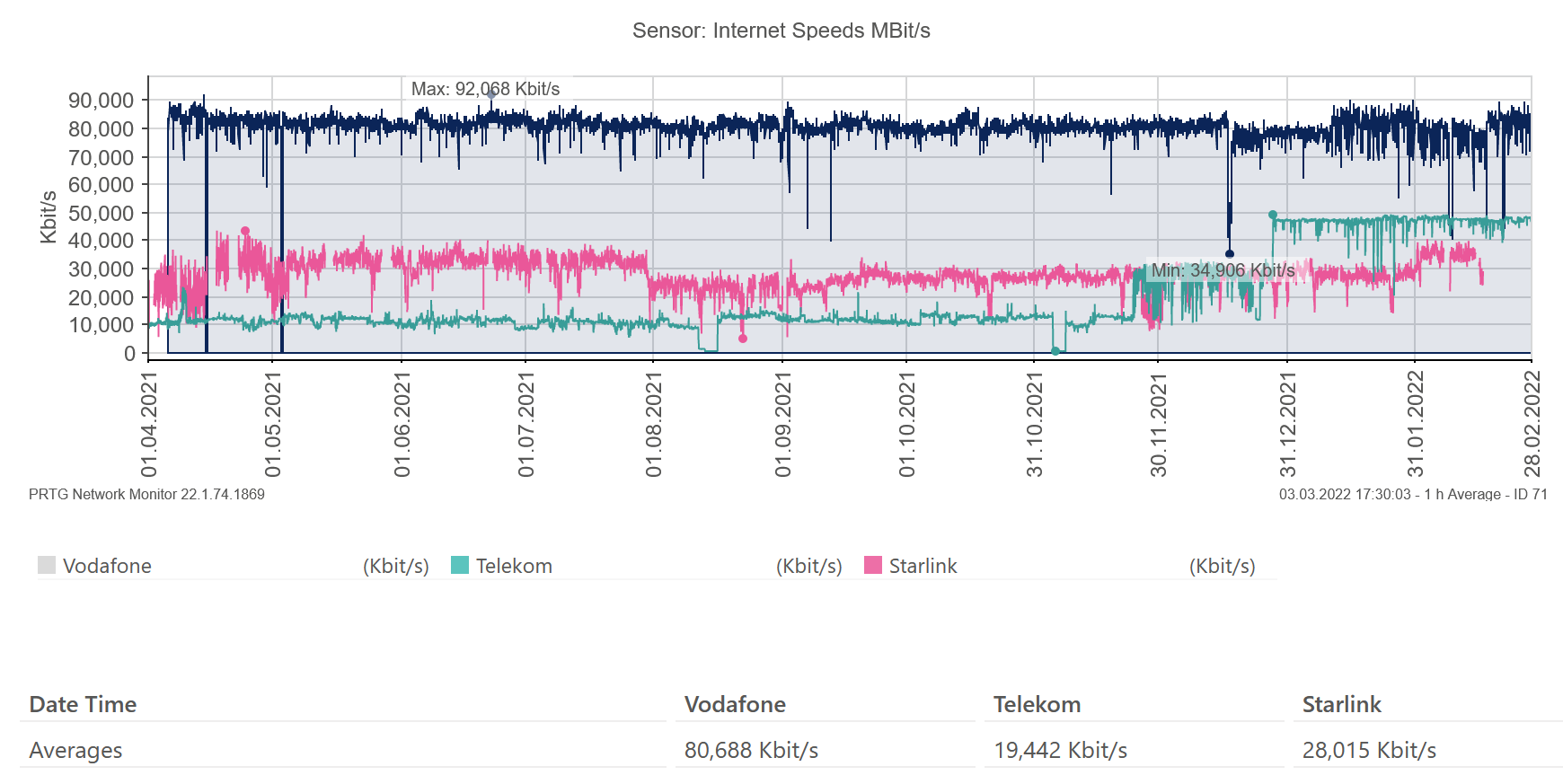 Starlink delivers an impressively consistent 30 Mbit/s for this file. Individual speed measurements with the Google speed test have repeatedly delivered 100-120 Mbit/s, and that’s more likely to be the real bandwidth value.

For comparison: The 500 Mbit/s Vodafone cable connection is by far the fastest (80 Mbit/s), and also the most stable. The Telekom/VSDL connection was just under one eighth of that for a long time (10 Mbit/s), but got steadily faster starting in November. At the end of December, I switched out the hardware of the VDSL test PC, and since then the sensor has been supplying the nominal value of the line at 50 Mbit/s. That means the data from before and after that is hardly comparable.

How is its availability?

After seeing Starlink do well up to this point, we now come to a bit of bad news. When I measure the availability of the three connections in terms of how many days or hours data was collected between January 1, 2021 and January 1, 2022 (in other words, when the internet connection was active), then here’s what comes out:

While the two cable-based Internet connections reach 99.5% availability, which is probably not bad for consumer-grade technology, Starlink only manages 95%. BUT: This recorded value is probably too low, because the time gaps always occurred when the test computer with PRTG running on it had lost its connection. As soon as I switched its power on/off, the connection continued immediately. I haven't investigated further (yet) whether this is a Starlink-specific problem. For now, when the connection is down, I start the test computer manually using a smart socket.

But here's another thing you can see in the table: When switching automatically between Vodafone and Telekom, we reach “three nines” – more than 99.9% availability on the basis of two low-cost consumer internet connections (73 euros/month and 63 euros/month)! Something like this is far more expensive otherwise. For a backup function like my Telekom connection, Starlink could actually be suitable.

Does Starlink’s bandwidth drop when it rains?

Heavy rain means that millions of small raindrops form as dipoles between the satellite and the antenna, so you might expect the transmission speed to drop when it rains. And you can definitely read that from the following graphs (marked time periods), especially for heavy-rain events such as on August 22, August 28, October 12, October 21, or December 28 (snowfall). But not always: There are also many heavy-rain events with no noticeable loss in bandwidth. In most cases, the weather-related fluctuations are less than the fluctuations in bandwidth that occur otherwise.

There doesn't seem to be any correlation with wind or temperature either, except on February 17, 2022, when the strongest wind of the year (50-80 km/h in gusts) knocked over the antenna on my roof.

It’s clear that at our location in the city, the Vodafone cable connection remains our primary internet option – it's fast and stable. But only with a second line and automatic switching do I reach the point where I no longer worry about access (> 99.9% availability).

To be honest, the Telekom connection data shocked me: I hadn’t expected that this internet option would be so poor. Maybe I really will switch to Starlink as a backup line, as soon as I clarify the connection stuttering.

But if you live somewhere without a fast VDSL or cable connection (that kind of thing supposedly does happen even in Germany here and there, *cough*), then Starlink is really an alternative to take seriously. At 99 euros, it does cost about 30% more than my Vodafone connection, but to me that seems worth it.

Are you thinking of installing a Starlink connection? Has the data I've shown here changed your mind one way or another? Let me know in the comments!